Sometimes, when you spend parts of a decade in a house before renovating, you think you know exactly what you want. You’ve lived in it. You’re comfortable. You know how to navigate the space. It all feels pretty straightforward. Sometimes, what you really want means tearing it all down, starting over and creating a truly special space. That is what happened with this beautiful beach house renovation.

That’s what happened when a retiring couple from Calgary opted to move full-time into their aging Cadboro Bay beach cottage. They knew a West Coast lifestyle suited them and figured a modest renovation of the 1940s bungalow would be enough. The unique location — a low-bank section of beachfront — was something that couldn’t be replicated elsewhere.

It had been the ideal recreational property, somewhere they didn’t have to worry about tracking sand across the floor. A beach house, pure and simple. They didn’t want to do an extensive reno or knock the place down, but when they got it down to the studs, they discovered that the foundation was not going to be adequate. It was uneven and had been patched together over the years.

So, on the advice of builder Andrew Tidman, of Tidman Construction, they decided to knock it down, redraw the designs and build from the new foundation up. That enabled an almost complete flexibility of design instead of something that would have been a compromise.

Their wish list was quite modest: to reorganize the floor space to suit a lifestyle that included entertaining and hosting family guests; to maximize the fantastic ocean views and to expand that to as many rooms as possible; and to strike a balance between an elegant home and one that was comfortable, practical, relaxed and retained a chic beach house vibe.

Tidman recalls his first meeting with the couple, walking into that old bungalow and thinking how much he loved it. “I thought the house they had there was amazing,” he says. “I would have just repainted a few things and redone the kitchen. But obviously the house they have now is tenfold to what it was.”

Tidman realized the couple’s real issue with the old space was design flow. “It wasn’t best for how they were using the house and how they wanted to use the house.” Building regulations wouldn’t allow them to expand the footprint of the original bungalow, nor could they go up in height to add a second storey. However, there’s ample elbow space in the resulting 5,200 square feet, which is spread over two levels, centred around a vaulted- ceiling great room. There are four bedrooms, three-and-a-half baths and an art studio — even a spacious butler’s pantry is slipped in, out of sight, behind the kitchen.

Wire-brushed oak engineered hardwood flooring runs throughout with a micro bevel finish and a beachy, whitewashed look. The open plan of the dining/living/kitchen area — without walls to block the sun or the eye’s gaze — was tempered with a number of small rugs to delineate areas. As their designer, Elaine Martel of Kimberly Williams Interiors, explains, “The carpets become the walls of open living.”

A discreetly placed spiral staircase that cascades natural light into the basement and several whimsical round windows adds a nautical motif, as well as breaking up some of the beach house renovation’s very horizontal and vertical lines.

One of the homeowners’ favourite touches is the fireplace surround — a new product, a super-thin, real travertine slab.

“I wanted something really special,” the homeowner says. “Both my parents were geologists so I love rocks and it’s a beautiful piece of rock.”

Installing that new foundation meant raising the house about a foot and a half — a decision that resulted in a basement with full-height eight-foot ceilings.

At a time when new construction seems to skew towards grand and ostentatious, there was a desire to keep this beach house renovation as much like a cottage as possible, as long as it was functional, clean, unfussy and tasteful. A place the owners could grow old in, where everything was on the main floor and easy to care for, but done beautifully.

Their philosophy was “go with what the house says” so they took clues from the environment to inform the interior design. Keeping a beach house style in what became a brand new space meant making choices that complemented and reflected beachfront living.

“We knew their aesthetic — a cozy, casual beach house,” notes Martel, “and didn’t want it to be something that takes your eye from the view or from her art (one of the couple is a professional artist with many of her own pieces hanging in the house).”

The colour palette is all soft and neutral and natural. Earthy tones that invite the outside in, but keep it warm when outside storms rage. Even the countertops, notably the Cambria quartz slab on the kitchen island, have a wavy, sandy pattern.

The open plan in the beach house renovation great room is airy and uncluttered, with French doors facing each other on opposite sides of the house to let the sea breezes flow through — or the conversation flow out onto the beachside porch and a fire table seating area, the couple’s favoured spot to enjoy the evening where there’s always something going on.

“We can watch them moving boats off the beach, sailing lessons, dog walkers, lovers, arguments, little parties. There’s always some drama going on.” 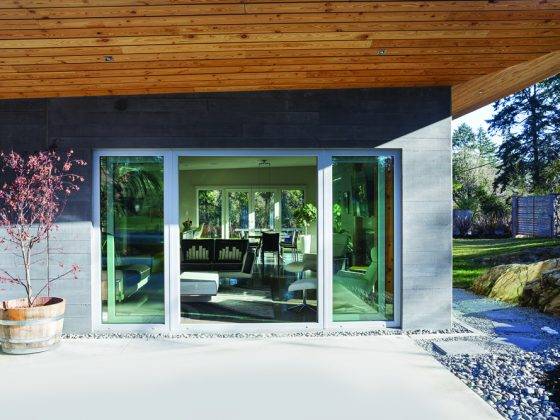 Building Material: The Best Choice for Your Home 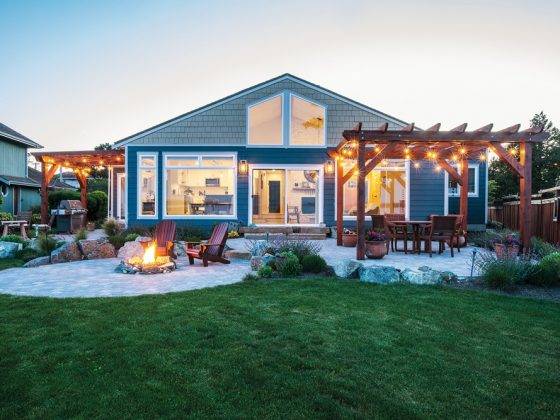 Bringing the Outside In

A Retreat for All Seasons