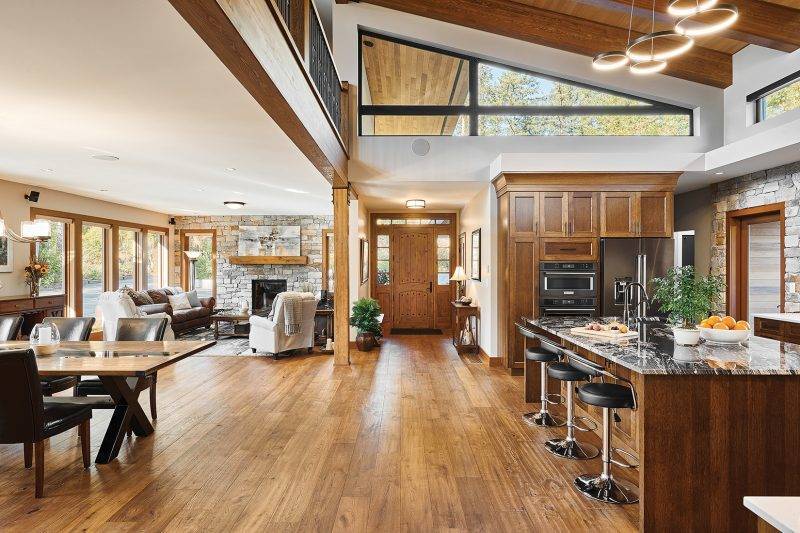 Constructing a luxury mountain lodge in a West Coast rainforest is a precarious undertaking. The steep ski-slope roof angles, as well as the log frame and stone accents, are ill-suited to the straight-lined and flat-roofed West Coast esthetic that’s so starkly modern.

But what if you could build your dream home combining both — all West Coast on the outside and Rocky Mountain chalet chic on the inside? That’s what Corrie and Dave Graboski have done, and the result is curiously understated, yet palatial. Theirs just may be the only unostentatious house of close to 8,000 square feet, perhaps because, when you’re inside, it’s a cabin in the woods. Monumental, but somehow intimate.

“I want people to be able to put their feet up and read a book and have a cup of tea and feel comfortable here,” explains Corrie.

The chalet style is a five bed/seven bath open plan over two spectacular levels, plus basement. Airy and bright doesn’t begin to describe how huge windows, a lack of interior walls and a main floor with a towering ceiling draw the outside in to bathe the heavy wood beams and abundant use of stone in natural light.

And then there’s the indoor saltwater pool, housed in an almost pressure-sealed 2,200-square-foot natatorium. Even though the pool — a hybrid 18-metre lap pool, plus fun pool for the kids and hot tub — is inside the house, there’s no odour or humidity leak into the living space, thanks to a dehumidification system that recovers 98 per cent of heat loss from the air and pumps it back to heat the pool water.

In fact, as the home’s builder Tim Agar of Horizon Pacific Contracting points out, the whole house is energy efficient, thanks to three forced air heat pumps. “When you think of this scale, with a swimming pool, energy efficiency is one of the key elements. Canada’s EnerGuide rates this house 8 out of 10, which is very good.”

Bringing the Mountains to the Coast
Originally from Alberta (Corrie grew up in Canmore in the shadow of the Rockies), the couple moved to Ardmore 11 years ago and knew this was where they’d stay. After renovating their old house as much as they could, they began looking for a lot to build on. A chance meeting at a Christmas party connected them with the owner of what must have been the last unbuilt lot in the neighbourhood. 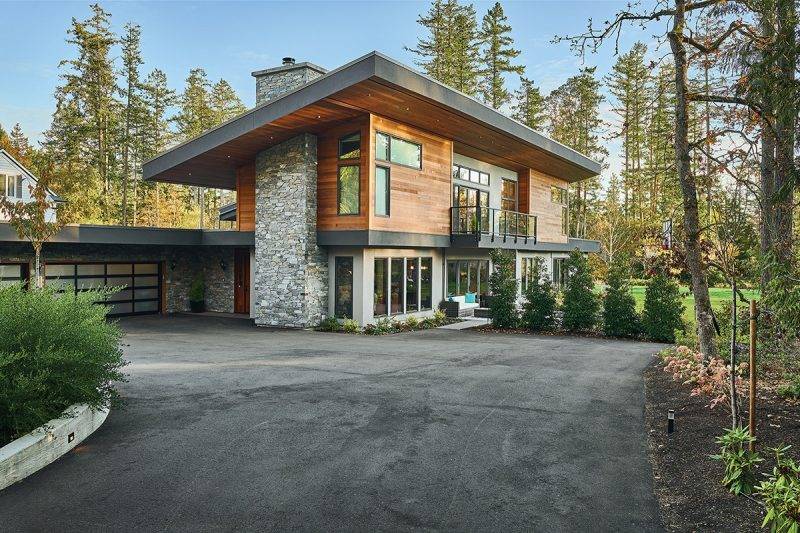 “We just jumped on it,” recalls Corrie, a doctor, who had her heart set on something with a Canmore-slash-Whistler ski chalet feel under plenty of peaked rooflines.

“We’ve always dreamed about what we wanted our house to look like. We even kept this little book of ideas for it.”

Her husband was looking to bring in a more modern vibe.

“I think the only thing we both had in common was we liked the rustic look of the chalet-style homes from Canmore with the big wood beams, the plank floors, the rock,” says Dave, a pharmacist for many years. “We loved that, and then, from Corrie’s aspect, she wanted to go more rustic. From my aspect, I loved the idea of combining that rustic with something that’s completely modern and making something unique.”

“They all said to me, ‘I know the outside looks really modern,’ and to me it took a long time to wrap my head around it because it was very strange and I don’t usually like modern; I like rustic. And they said, ‘Corrie, trust us. We’ll give you rustic on the inside and you’ll love it.’ ”

All Hands on Deck
The Graboskis, their 10-year-old twins and a dog the size of a wolf, moved in a year ago, after a long construction period where they were very hands-on.

Well, Dave was, anyway. “Maybe a little too much,” he grins. 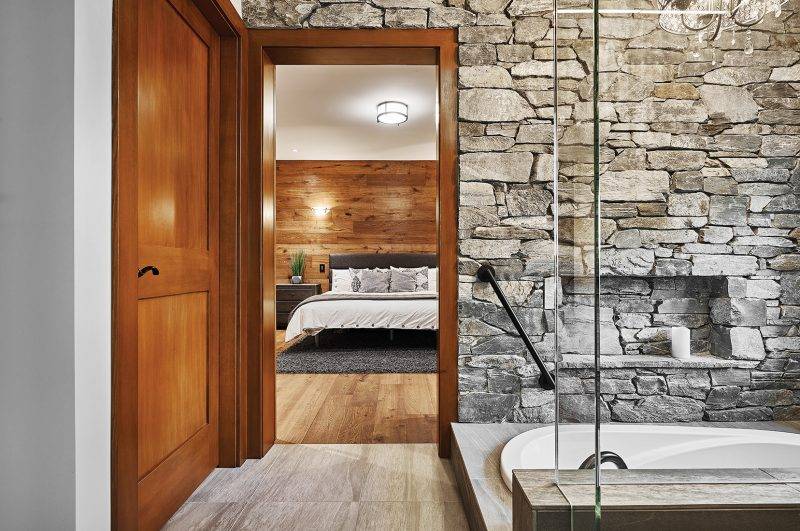 Agar won’t say that, but acknowledges Dave’s deep-dive involvement. “We saw him on site every day. I think he knows far more about construction now than he does about pharmacy.” Dave laughs when he admits he couldn’t just leave the details to someone else. “It was such a big deal to me,” he says. “This is our once-in-a-lifetime. We picked every single thing, every stone, every colour, the floor, even where the light switches go.”

The way one of their interior designers, Elaine Martel, sees it, Dave could come to work with her. “He has such a keen sense of design style. He really drove the boat when it came to the design and look.”

The couple praised the designers for seeing their dream and helping them realize it. “Right off the get-go, they knew exactly what we were looking for,” says Dave. “Everything they brought us was in line with our vision.”

Flooring could easily be overlooked in a home of this size, but it’s the piece of finish that drove everything else, explains Martel. And again, it was a matter of pleasing both Corrie’s rustic and Dave’s modern tastes.

“So we had to find one that worked for the warmth and the look they could both love,” Martel says. “Once that was selected, all else fell into place — the stairwell wood, the wood windows and everything was based around the flooring.”

Wide-plank, hand-scraped engineered oak from Fuzion Flooring informed the generous use of rock in the kitchen, master bath, laundry room and as a dramatic basement-to-second-floor feature wall framing the stairwell. All that rock, stacked natural ledge stone, helped pull the warm tones from the hardwood.

Agar appreciates that, for Dave and Corrie, this is their house, the one they want their kids to grow up in and that everything is detailed to what their family needs and wants.

For Dave, the house is superior than what he and Corrie had in mind. “Working in conjunction with Tim and with the architect, putting their ideas together with ours, we ended up with something better than what we wanted.”

Corrie agrees … at least she does now.

“This is not what I wanted, at first. Dave came on board faster than I did. I really, really struggled, changing my vision and just ended up trusting the process and am very glad that I did. And now this is our forever home.” 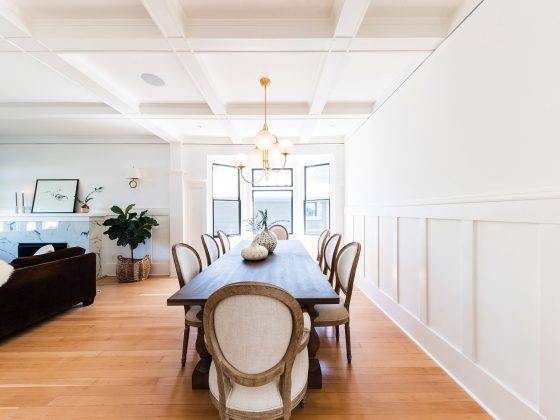 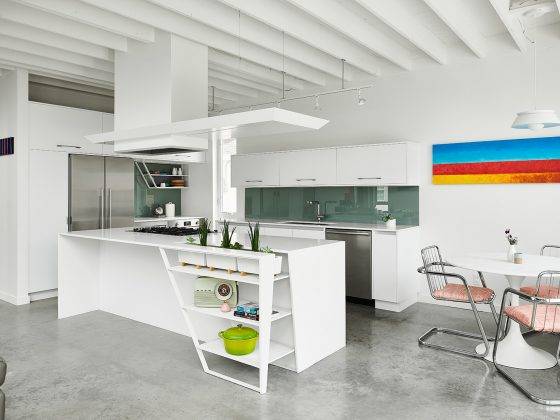 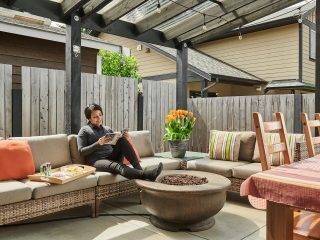 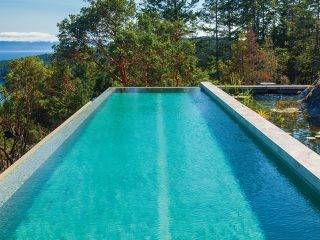 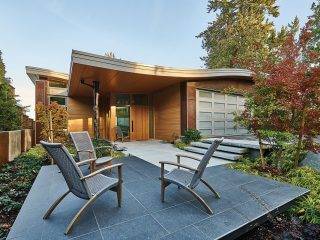 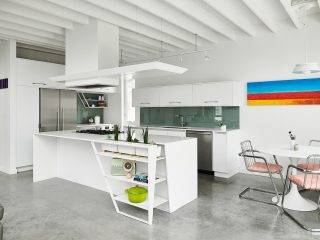 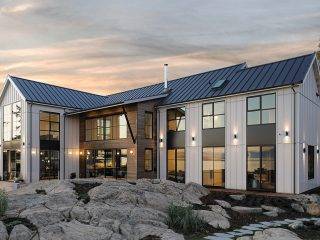 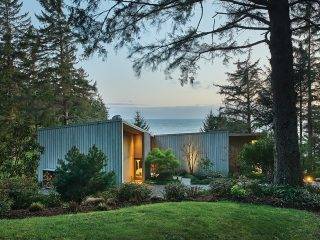 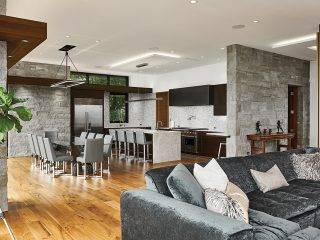 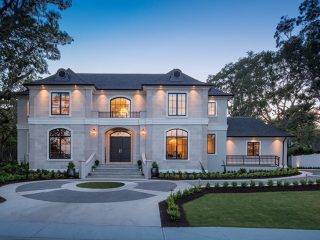 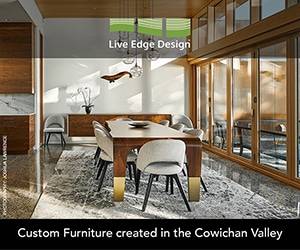